MILAN will host the International Astronautical Congress (IAC) in 2024

The city of Milan will host the 75th edition of the International Astronautical Congress (IAC) 2024, the most important international event in the space sector

The city of Milan will host the 75th edition of the International Astronautical Congress (IAC) 2024, the most important international event in the space sector. The announcement was made by the Committee composed by the Italian Space Agency (ASI), the Italian Aeronautics and Astronautics Association (AIDAA), global academic representatives, and Leonardo, the Italian aerospace industry leader.

Milan’s candidacy was strongly supported by the Italian Government through the Inter-ministerial Committee for Space and Aerospace and the local institutions, including the President of the Lombardy Region and the Mayor of Milan. Milan was selected over other important candidate cities such as Budapest (Hungary), São Paulo (Brazil), Seville (Spain) and Adelaide (Australia). The Italian city was selected by more than 400 delegates from 71 countries from the International Astronautical Federation’s General Assembly, which gathered in Dubai from 25th to 29th October at the 72nd edition of the IAC.

The IAC, founded in 1951, is organised annually by the International Astronautical Federation (IAF). The congress currently includes 73 member states represented by all the main space agencies, companies, research centres, universities, associations, and museums. The arrival of the IAC in Milan marks success for the Italian space sector as a whole. Furthermore, it is a reward for the excellence of the city and it recognises Italy’s leading role in the global space economy. Milan has a thriving and consolidated space ecosystem comprising of industry, SMEs and start-ups, research centres and universities. These all contribute to the innovation and technological development of various international space programmes.

Giorgio Saccoccia, President of the Italian Space Agency declared: “The work accomplished in the last months leading us to this prestigious victory was a beautiful example of how the Italian ecosystem works with great effectiveness in the space sector. The Selection Committee has rewarded the precision and accuracy of our candidacy, indirectly recognizing the Italian leadership in the current international space scenario. The Italian Space Agency has enthusiastically decided to support and contribute to the candidacy of “Team Italy” with the proposal of Milan, making use of the agency’s important network of international relations and its vision on the future of space activities, to attract consensus. We couldn’t be more satisfied with the result obtained for Italy!”.

Alessandro Profumo, CEO of Leonardo commented: “It is a victory for Milan, for the Lombardy region, for the national space industry and for the entire supply chain. As Leonardo we are particularly proud: we have strongly embraced and supported the candidacy because we believe that the value of Space, where we have been playing a leading role on an international level for years, is fundamental and strategic for the future of technological innovation at the service of the country and its sustainable growth”.

“We are really proud the IAF general assembly choose Italy and the city of Milan to host the 75th edition of the congress. This was only possible thanks to a synergised organisational effort that led to an impeccable and complete candidacy proposal” highlighted Erasmo Carrera, President of AIDAA.

The chosen motto for the IAC75 is “Responsible Space for Sustainability”, with the aim of raising awareness in the international community for a conscious and responsible use of the space environment. With an increase in the number of missions in orbit and the emergence of large constellations made-up of hundreds of satellites, the risk of collision between objects in space increases. This not only means the creation of new dangerous space debris; however, this could compromise the proper functioning of satellite systems on which many activities of our daily life depends: from telecommunication services to transport, from environmental monitoring to security.

The 2024 edition will also include themes of diversity and inclusiveness. Space has always been the place where different countries, generations, genders and skills are crucial for the development, evolution, innovation and knowledge of humanity. On this occasion, the city of Milan will become a greater environment by which guests can enhance themselves and others, sharing experiences and skills regardless of their personal and professional background. It will also be a place for young people and future opportunities, for women, as well as developing countries.

IAC 2024 will be hosted by the Milan Congress Center (MiCo), the largest Congress Center in Europe with a total capacity of 21,000 seats. The complex offers two plenary rooms, respectively with 4,000 and 2,000 seats, and a 1,500-seat auditorium. The city has strong experience in organising international events – such as the annual Milan Fashion Week and Expo Milano 2015 – and can count on the efficiency of key services such as the urban transport network, the presence of airports and railways connected with the main European and global cities.

For Italy, it will be the fifth time it has been the host country of the IAC. The first edition was held in Rome in 1956 and three more followed: again in Rome in 1981, in Turin in 1997 and the last in Naples in 2012. The Italian space community has always actively participated in the IAC through its presence at the event, the presentation of papers and the organisation of conferences and debates. 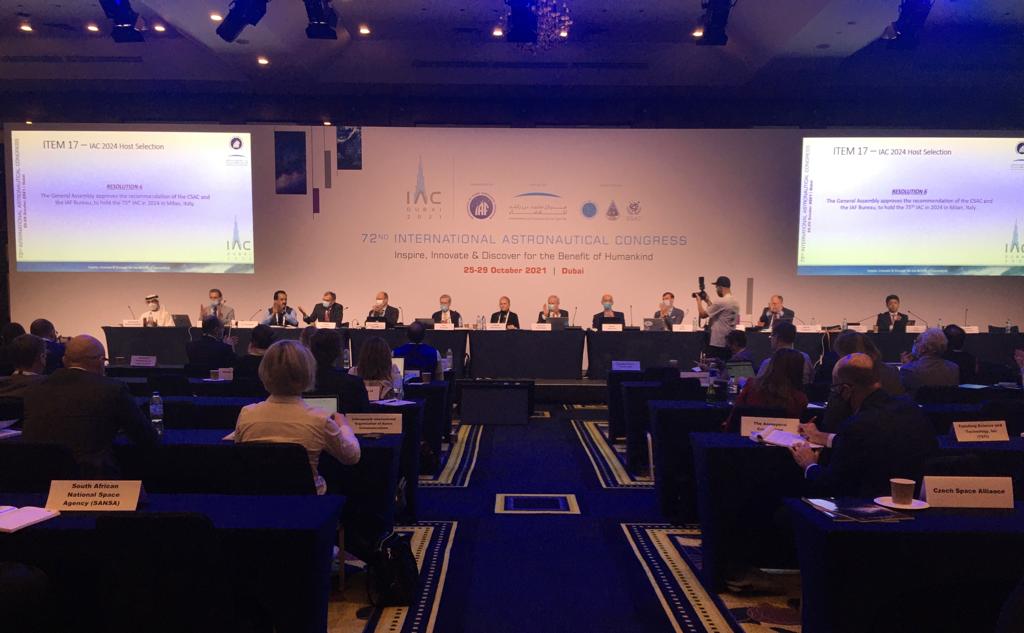 We use cookies on our website to give you the most relevant experience by remembering your preferences and repeat visits. By clicking “Accept All”, you consent to the use of ALL the cookies. However, you may visit "Cookie Settings" to provide a controlled consent.
Cookie SettingsAccept AllReject All
Manage consent

This website uses cookies to improve your experience while you navigate through the website. Out of these, the cookies that are categorized as necessary are stored on your browser as they are essential for the working of basic functionalities of the website. We also use third-party cookies that help us analyze and understand how you use this website. These cookies will be stored in your browser only with your consent. You also have the option to opt-out of these cookies. But opting out of some of these cookies may affect your browsing experience.
Necessary Always Enabled
Necessary cookies are absolutely essential for the website to function properly. These cookies ensure basic functionalities and security features of the website, anonymously.
Functional
Functional cookies help to perform certain functionalities like sharing the content of the website on social media platforms, collect feedbacks, and other third-party features.
Performance
Performance cookies are used to understand and analyze the key performance indexes of the website which helps in delivering a better user experience for the visitors.
Analytics
Analytical cookies are used to understand how visitors interact with the website. These cookies help provide information on metrics the number of visitors, bounce rate, traffic source, etc.
Advertisement
Advertisement cookies are used to provide visitors with relevant ads and marketing campaigns. These cookies track visitors across websites and collect information to provide customized ads.
Others
Other uncategorized cookies are those that are being analyzed and have not been classified into a category as yet.
SAVE & ACCEPT
Powered by